OC Transpo will be increasing bus frequency in Wateridge Village with the summer service change beginning on June 27, 2002.

Working in conjunction with OC Transpo, Councillor Rawlson King can confirm that transit improvements for Wateridge Village will be implemented with the summer service change, beginning on Monday, June 27, 2022, and will include improved bus service on Route 27.

An additional three return trips are being added to the schedule, operating at approximately 10:00, 12:00 and 14:00 on weekdays. Limited service is initially proposed by OC Transpo, until ridership supports additional trips. Currently Route 27 provides only peak period service.

Route 27 would be re-routed through the Wateridge area to travel in a one-way loop north on Wanaki, west on Mikinak, and south on Codd’s.  With this change, existing service would be removed from Mikinak west of Codd’s, du Vedette, Hemlock, and Codd’s north of Mikinak. The new routing (shown in blue), as well as the area that would be within a five-minute walk (400 m, shown in orange) is displayed below.  To accommodate the route change, bus stops identified during the development review process on Wanaki and Codd’s would be installed. Staff will also review the potential to add a mid-block stop along Mikinak to accommodate this interim routing. The revised routing brings a net increase in the number of residents within a 400 m walk of transit service but does also put 12 homes on the far west of Avro Circle beyond a 400 m walk.

The proposed routing below also accommodates a planned closure of Codd’s between Hemlock and Mikinak expected to take place from August to November this year. 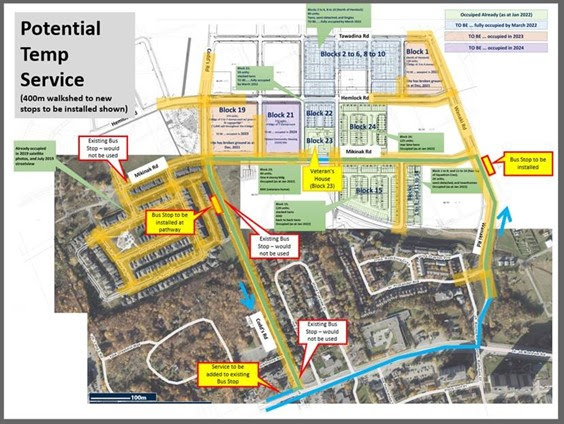 These revisions provide the foundation for future expansion in the community for more frequent services as appropriate when more people return to on-site work or learning, and as more of the Wateridge community is constructed and occupied.  In the future, it is proposed to move service from Mikinak to Hemlock once the area is more developed and local construction is completed. As well, OC Transpo is entertaining interest from area residents, the Wateridge Village Community Association and Veterans’ House to adjust service to connect to Blair Station and the Gloucester Shopping Centre in the future, instead of the current connection to St-Laurent Station, which staff will take into consideration for future adjustments.