Rawlson King, Councillor for Rideau-Rockcliffe (Ward 13), released his newsletter for July 2019 outlining upcoming news and events. This second issue provides Ward 13 and City Council updates, including news around the Chateau Laurier and Salvation Army, along with information about upcoming community events and public consultations.

Hope your summer is going well and that many of you are taking some time to enjoy the beautiful weather.

There are so many events and activities throughout the month in the ward. We hope to see you out and about at the various events – please come and say hi.

As you’re all aware, I was not a member of council at the time the delegation was made to planning staff in 2018. For a landmark so iconic and beloved, Council should never have abrogated it’s responsibility to planning staff. The proposed addition is not appropriate for the site, given it’s prominence in the skyline and as such as defining feature of Ottawa.

Many experts have said that the project should not go forward and many residents have called and e-mailed me asking to reject it. They have told me that this issue is not just about the Chateau Laurier, but also reflects the influence that developers have on our City.  I believe we need to listen to residents when they speak out.

Of course, I will be voting in favour of Councillor Mathieu Fleury's motion at Council tomorrow on July 10 to revoke the heritage permit and delegation to heritage staff for the Château Laurier since the proposed addition is not appropriate, given the property's importance to the city and its national significance.

I brought forward a motion to address gun related violence to City Council on 26 June, as was part of my election campaign. The motion asked for the root causes of gun violence be addressed through greater social investments, better youth programming and strategies to tackle illegal gun ownership. .The levels of gun violence and gun related violence continue to rise and we need to address these issues before they begin to manifest themselves.

It also asked the Mayor to write to the Federal Government asking for the sale and possession of handguns to be banned within the City Of Ottawa. The motion has been referred to Police Services Board with the potential for the motion to come back to Council in September. The team and I will keep you informed on the progress.

Along with fellow urban Councillors’ Leiper, McKenney, Menard and Fleury, I was heartened to see the turnout at our first Official Plan consultations at City Hall. The Official Plan lays the foundation for all of the City’s work going forward and so it is critical to get it done correctly. What kind of city do we want to live in? In particular, with planning committee approving an official plan amendment contrary to the good faith of a community design plan in Old Ottawa East, it is more apparent than ever that we need certainty in our Official Plan. We’re going to continue consulting in the lead up to the Official Plan discussions – stay tuned for more information towards the end of the summer.

I’ve received a lot of correspondence from residents about the Salvation Army, and a lot of concern about whether I do or don’t support the shelter. Bearing in mind that the proposed shelter wouldn’t be in our ward, nonetheless, it’s proximity makes it something that concerns all of us.

My messaging on this has been clear – while I am concerned about homelessness, I didn’t think that the original plan, for 350 beds on Montreal Road, was appropriate for what is a traditional main street. It concentrates poverty in an area that is already facing substantial community safety issues. What I’m keen to see is a smaller facility, with a mix of people (not just adult males), and more supportive housing which will enable people to have a permanent home with wrap around services available on site for them 24/7. I was also of the opinion that addiction services should have remained downtown.

An hour before the last Council meeting, The Salvation Army issued a media release for the Montreal Road Hub which included the supportive housing proposal and to reduce the number of beds from 350 to no more than 100 and keep addiction treatment downtown. However, I fear that this is now too little, too late. The community has now been so angered by this process that the well has been poisoned. I’ll continue to support the community in its endeavours and hope that more appropriate and adequate proposals come forward.

Another reason why our gun ban is so crucial is because yet another tragic shooting occurred in Overbrook on 2 July 2019. We’re continuing to work with the City on improvements to Overbrook especially the Four Corners. With respect to the beautification project, we expect shovels will be in the ground in Spring 2020 once the ground thaws but expect to see designs later this year. Of course, we’ll include the community in these discussion.

I was honoured to attend the 100th anniversary celebration of Lindenlea as a planned neighbourhood with the unveiling of the beautiful art at the community centre. Such a great block party and a lovely way to celebrate Canada Day. Congratulations to Stelios and the rest of the Lindenlea Residents Association for a great event. 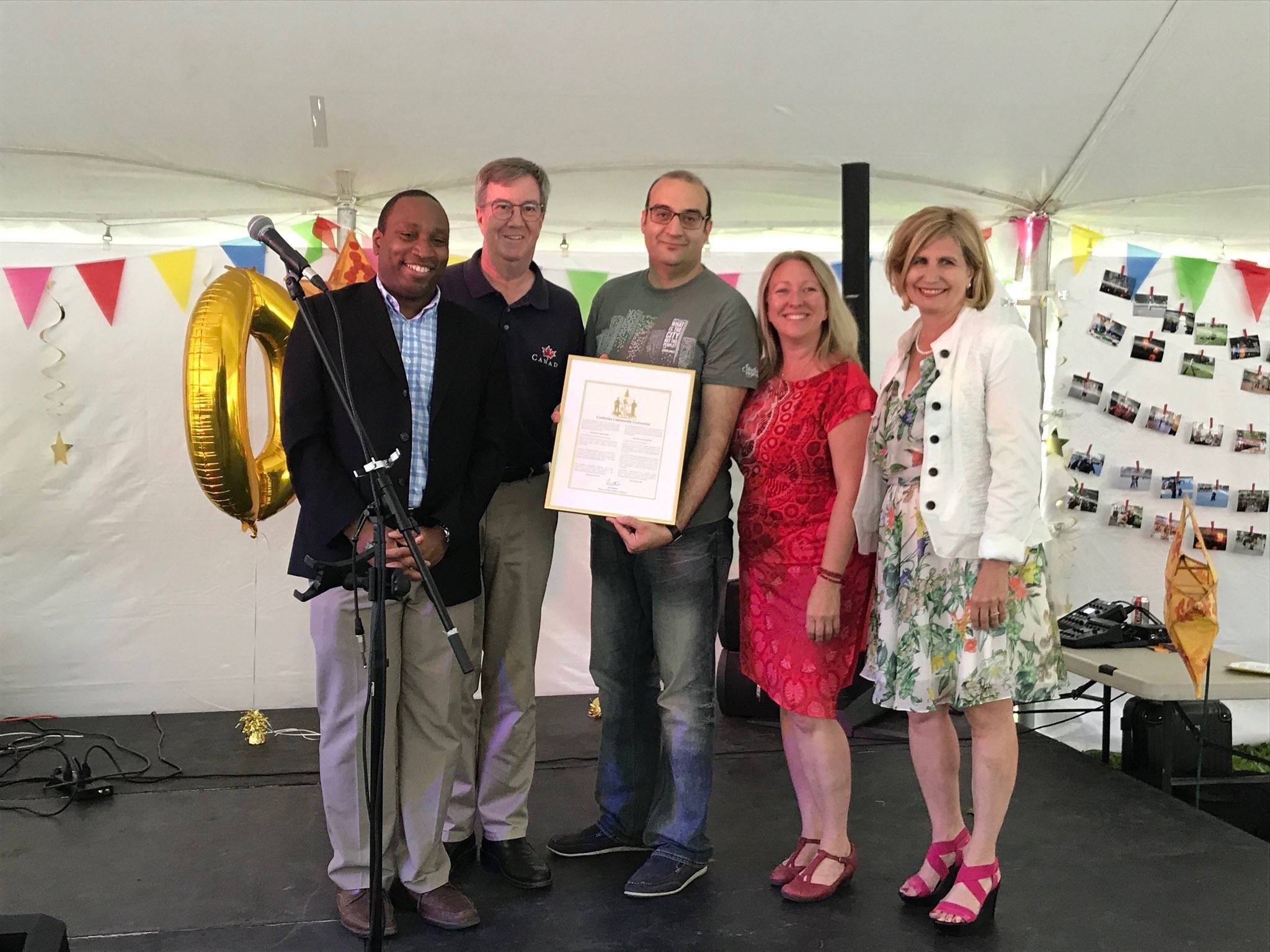 The ACFO is looking to improve its’ services and they’re seeking public opinion to feed into their strategic outcomes for the next 3 to 5 years. Please consider taking their survey at https://www.surveymonkey.com/r/KKDLK6J

First Pop-Up Office and Next Pop Up Offices

I held my first pop-up office on June 22nd and was heartened to see so many people coming to talk to me, concerned about their neighbourhoods. I’m going to continue with pop-up offices every month, but have also heard the concerns of some residents about privacy of being overheard in a public place. You should always know that if you have a concern that you want to address in private you can always schedule an appointment with the office for a separate time to discuss matters. Just email us at rideaurockcliffeward@ottawa.ca.

My next pop-up office will be Friday 19th July from 10 am to 1pm at ‘The Bridge Public House’ at the Rideau Sports Club. RSVP HERE.

Community Acting Together
Between July 16th and August 14th 2019 between 2 to 6pm
Learn how to positively and safetly address community low-level violence through theatre including street harassment, intimidation, retribution etc. This project includes acting games, building teamwork and discussing perspectives on low-level violence in Overbrook. For more information contact Valerie Fortier at valerie.fortier@crcrr.org or 613-745-0073 ext 117

Introduction to Container Gardening
July 18th, 2 – 3:30pm
Go home with your own potted vegetable plant! Free, but registration required. Visit the Resource Centre at 225 Donald Street in person to sign up.

Starry Nights – several dates
July 18 @ Glynn and Lola
July 22 @ Whitton Crescent and Presland
Come and enjoy a story-telling or dragonfly puppet making workshop. The workshops are followed by a block party community meal – please bring a lawn chair or blanket. In case of rain, all events will move to the Overbook community centre. Free admission.

Romeo and Juliet in New Edinburgh Park
July 17,, 7 – 9pm
In partnership with the Crichton Community Council, bring a blanket and some food and watch ‘A Company of Fools’ present Romeo and Juliet. Free admission

Community Meal
July 25th, 1 – 3pm
Come and enjoy a delicious, healthy meal at the Resource Centre. It’s the last one before summer break!

Pints in the Park
July 27th, 3:00 - 7:00 PM
An adult focused but family friendly event at the Manor Park Community Centre with two local breweries!. A selection of local food and craft vendors to be announced. Free admission.