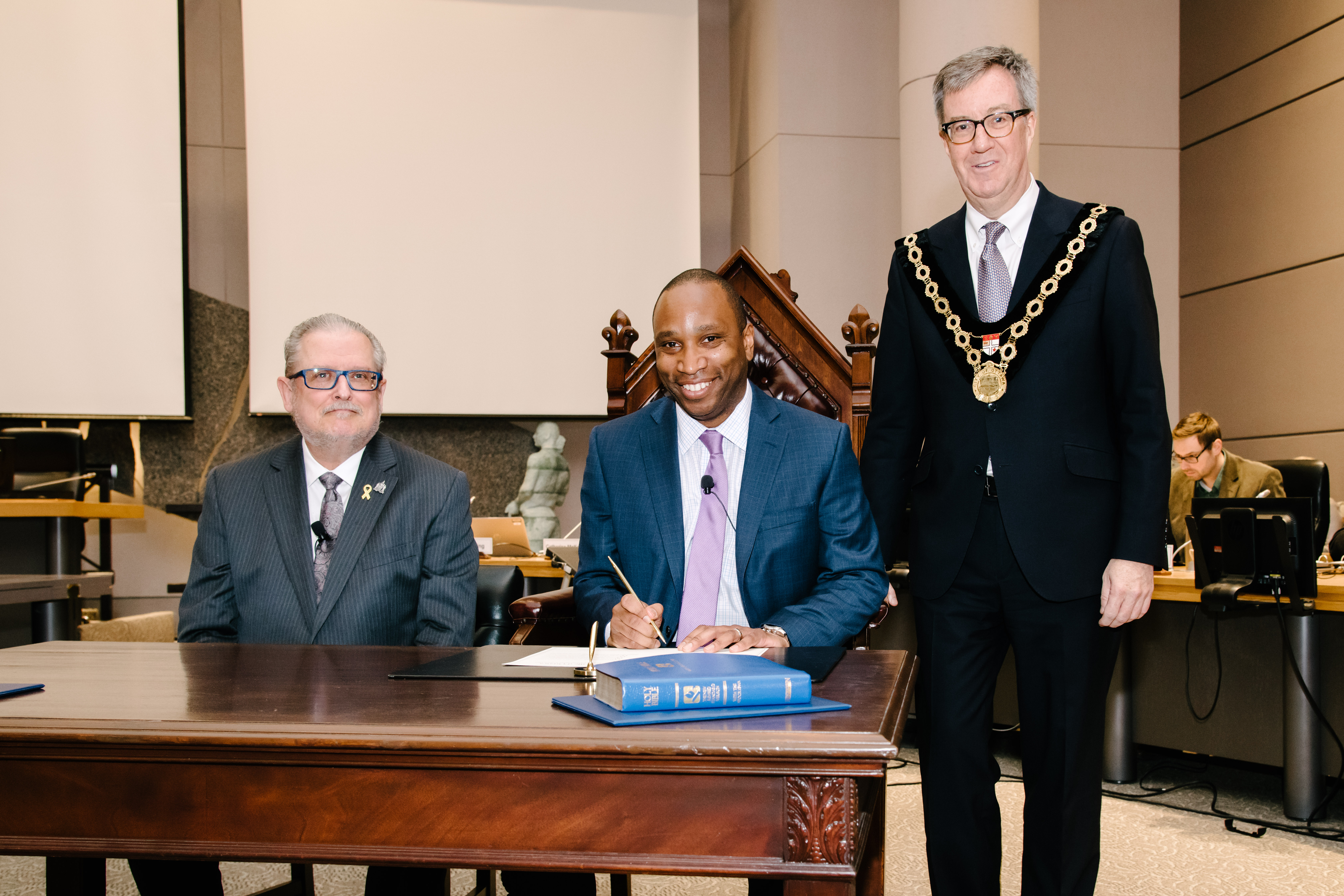 I would like to take this opportunity to thank the residents of Rideau-Rockcliffe for entrusting me with the honour and responsibility of becoming your new representative at City Hall.  My grassroots involvement, community experience and love of our city means I will endeavor to effectively represent you and the interests of our ward.

As an experienced, result-based community leader, I’ve lived in Ward 13 for 15 years and have been an active volunteer for 10 years on a wide range of civic issues.

I previously served as the President of the Overbrook Community Association, was a volunteer Board Member and Treasurer at the Rideau-Rockcliffe Community Resource Centre, and served as the inaugural Co-chair of the Ottawa Police Service’s Community Equity Council, which aims to bridge gaps between police and racialized communities.

I ran for public office in the recent by-election because I believe Ward 13 needs experienced leadership to address issues of a fairer and more community focused development process, public safety, and more affordable and accessible transit and transportation at City Hall. We have serious issues, including lack of infrastructure investment in road maintenance and transit, issues with spot development, along with increasing crime rates and a lack of economic opportunities.

I will apply a progressive approach to work towards resolving these problems that reflects the direction that you, the residents, want for this ward and city.

As a consequence, my early priorities include: i) making improvements to public transit and enhancing road maintenance; ii) working with communities to bring more openness and transparency to the planning and development process; iii) working on a poverty reduction strategy for our ward’s most impoverished neighbourhoods; and iv) developing a comprehensive city-wide climate change policy.

This monthly newsletter will ensure you have the latest updates.  We will also provide updates through our new Web site, which is available at: http://www.rideau-rockcliffe.ca.

At my first Council meeting on April 24, I was gratified to vote in favour of a motion to declare a climate emergency. Climate change is the most significant challenge of our time and requires immediate action. With the climate emergency declaration, Council will act to recognize climate change as a priority in the City’s Strategic Plan and will provide measurable criteria to determine whether progress is being made in the City’s efforts to reduce greenhouse gas emissions. Council’s decision will incur a one-time cost of $250,000, that will be paid from surplus revenue for the City’s Hydro Ottawa dividend. This money will help the City accelerate its work on renewable energy and energy conservation programs and allow it to conduct more technical analysis on reducing emissions.

At the May 22 Council meeting, after hearing from activists within the disabled community, I put forward an inquiry to the Transportation department concerning the status of ParaTranspo's proposed reservation system. ParaTranspo users have waited long for this system to be implemented and I asked for a clear timeline on when the system would be implemented.

Urban Councillors also put forward a motion to move the City towards "Vision Zero" after the tragic death of a cyclist, as a result of a collision in front of City Hall. I am committed to making this City safer for cyclists and that is why I will be fully supportive of the motion.

The next City Council meeting will be held June 12, and there will be two subsequent meetings before Council takes a hiatus until September.

I will hold my first "pop-up office" on June 21 from 10:00 am – 1:00 pm at Union Street Kitchen Café (42 Crichton Street).  I will aim to hold "drop-in" days regularly throughout the year in different locations throughout the ward.  It will create an opportunity for me to connect with residents, discuss ideas and address your questions and concerns. RSPV here.

I held my first Ward Council on May 30.  Our Ward Council is designed to allow residents across Rideau-Rockcliffe to voice their concerns and provide direct and useful input to my office. The Ward Council include representatives from each community association in the Ward, along with social service organizations.  The Council meets on a quarterly basis, allowing residents to have an opportunity to outline their top priorities to my office. We identified many important issues, including affordable housing, traffic, along with planning and development. Our first meeting was constructive, and will lead to more solutions for our Ward in the near future.

I attended an announcement with Mayor Jim Watson in May at the Royal Oak in New Edinburgh on Beechwood Avenue where it was announced that the City is reducing patio encroachment fees paid by bars and restaurants by 50 per cent at a cost of $280,000, saving the average restaurant with a patio $3,200 annually.

Residents were invited to a public consultation on the design of Lola Park (located on the corner of Lola and Presland) on May 7 at the Overbrook Community Centre to provide feedback for two designs which the City offered for consideration.  Based on that input I approved funding, based on the public's preferred design. Construction should begin this autumn.

The City will undertake watermain, sewer and road renewal work in Overbrook throughout 2019 and 2020.  The work will be conducted on Presland Road between Vanier Parkway and Whitton Crescent, within easement between Forestland Private and Arcola Private, along the eastern side of Vanier Parkway between Glynn Avenue and Prince Albert Street, and on Sharp Street between Glynn Avenue and King George Street.

In early May, the Ontario government announced that they would introduce Bill 108, the More Homes, More Choice Act.  While the bill purports to increase housing stock, in reality it takes the power out of communities and their local Councils and centralizes power with the province and the Local Planning Appeal Tribunal (LPAT). The bill also makes it easier to appeal heritage designations.  Due to these deficiencies in the legislation, I was pleased to provide comment on this Bill with my colleague Jeff Leiper and the Urban Caucus in a detailed op-ed published in the Ottawa Citizen here.  I was also able to address the legislature's Standing Committee on Justice Policy with Councillor Leiper, also on behalf of the Urban Caucus, to reconsider the proposed changes to the power of municipalities over inclusionary zoning and heritage.  You can read my statement here.

In more positive news however, cuts expected to be made by the provincial government to essential services provided by municipalities were deferred after significant push back from both residents and elected officials. I will continue to be an advocate for increased investments in our communities.

The Manor Park Garage Sale will be held Saturday, June 15, outside of the Manor Park Community Centre (100 Thornwood Road) and throughout Manor Park, from 8 am to 1 pm. The Boy Scouts, Cubs and Beavers will be selling drinks and hot dogs. Come find some new treasures and meet your neighbours! A $20 contribution secures you a table, and vendors wishing to set up a table can contact Pilar Doe at pilardoe@gmail.com.

The Wateridge Village Community Association will be holding its Annual General Meeting on June 19 at 7 pm at the East Gate Alliance Church (550 Codd's Road).  The community association invites all residents to attend the meeting. There will be important updates that you will not want to miss!

English Language Tutoring for the Ottawa Community (ELTOC) is hosting their annual fundraising event on June 22, at Elmwood School (261 Buena Vista Road), from 2 pm  to 4 pm. Enjoy live music, a silent auction, tea and sweets, and more! Tickets are $30 and there is limited space – you can find them on Eventbrite or reserve your space by e-mailing admin@eltoc.ca.

Lindenlea turns 100 this year and the celebration takes place on June 30 at the Lindenlea Community Centre (15 Rockcliffe Way), beginning at 2:30 pm. There will be food, music, and historic displays, as well as the unveiling of a new mural by local artist Claudia Salguero. Come and celebrate this community milestone!

The City will be holding a number of public consultations on issues facing renters and other residents throughout the City on things such as short term-rentals, rooming houses and student housing. This your chance to have your say on these important issues and ensuring the City has a large focus on building affordable units, a fairer situation for tenants and enforcing its by-laws when it comes to AirBnBs.

You can find a list of all the consultations here.

As Ottawa approaches a population of one million residents, the City is working to develop a new Official Plan. This is the strategic document that will guide the city’s physical growth and development for the next several decades. There will be more opportunities in the future, but currently there are two ways to engage. The urban councillors will be holding a public consultation on June 24, from 6:30 - 8:30 pm, at Jean Pigott Place in City Hall (110 Laurier Avenue West). Residents can also provide feedback through an online survey until June 30. Tell us what you want your city to look like!

Email: rideaurockcliffeward@ottawa.ca
Phone: 613-580-2483
Address: 110 Laurier Ave W, Ottawa, ON, K1P 1J1
We use cookies to analyze our traffic and help us understand how visitors interact with our website by collecting and reporting information anonymously.
×