Mayor Jim Watson and Rideau-Rockcliffe Ward Councillor Rawlson King presented the Mayor’s City Builder Award to Rowan Parkinson and Avery Parkinson at City Council, in recognition of their charitable contributions in Ottawa and beyond. 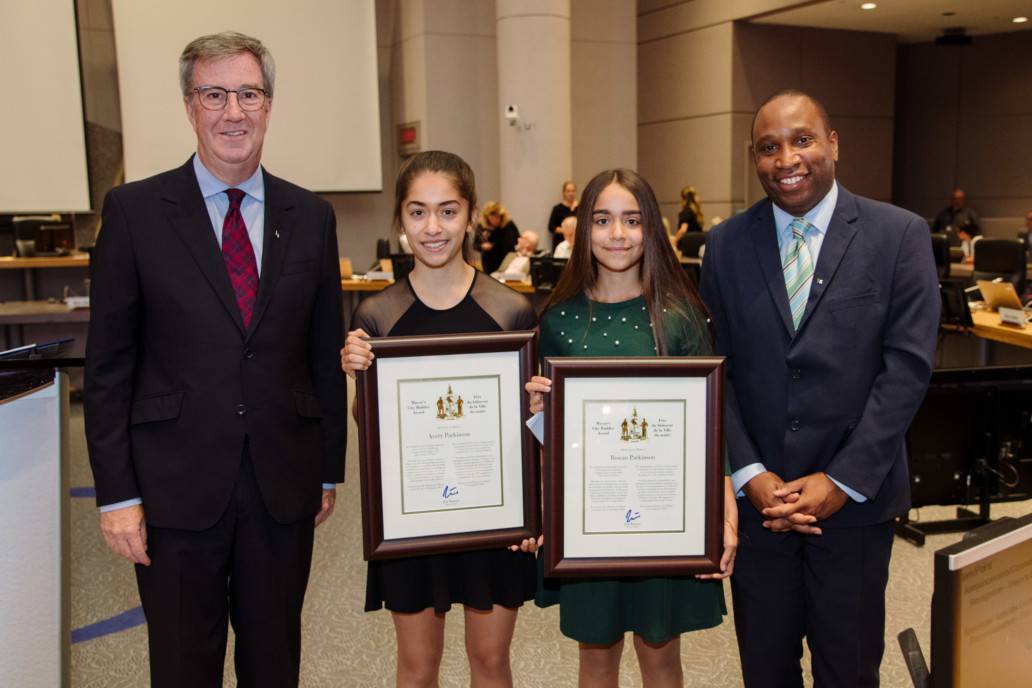 Sisters Rowan and Avery, aged 12 and 14 respectively, are Elmwood School students who are on a mission to make Ottawa a better place.

Following their grandfather’s Parkinson’s disease diagnosis, Rowan, who is now in grade nine, committed to raising awareness and funds for research into the disease.

Avery, now in grade six, was moved by the homelessness she witnessed in Ottawa. She began making hundreds of sandwiches for the residents of Shepherds of Good Hope and the Ottawa Mission.

Their idea to start a non-profit organization, called the MapleWishes Foundation, was born out of acts of empathy and generosity. MapleWishes’ motto is “Inspiring one another to leave positive and enduring footsteps in our wake.” Through their foundation, the girls fundraise, volunteer and motivate their peers to support eleven charitable causes in the Ottawa area.

Rowan and Avery have committed to raise $50,000 for the Parkinson Research Consortium at the Ottawa Hospital. Some of the other projects supported by the MapleWishes Foundation include QUAIL House, a home in Chelsea for developmentally-challenged adults, More Bees Please, which aims to help restore the bee population in the Ottawa area and Bookmarked, which builds and renews the collections of local libraries.

MapleWishes is committed to diversity and to providing a welcoming environment to Ottawa’s immigrant youth through the Ottawa Community Immigrant Services Organization Youth Program, known as YOCISO.

The Mayor’s City Builder Award is a civic honour created to recognize an individual, group or organization that, through outstanding volunteerism or exemplary action, has demonstrated an extraordinary commitment to making our city a better place today and for the future. This may include lifelong service, outstanding acts of kindness, inspiring charitable work, community building or other exemplary achievements.

Individuals, groups or organizations may be nominated by members of City Council or the public.