Rawlson King, Councillor for Rideau-Rockcliffe (Ward 13), released his newsletter for September 2019 outlining upcoming news and events. This third issue provides Ward 13 and City Council updates, including news about the launch of the Confederation Line (O-Train Line 1), along with information about upcoming community events and public consultations.

For all those who were away during the summer, welcome back and I hope you had a relaxing time away. September has that feeling of renewal and reset in the air – it’s cooler out, and autumn is on its way, with everyone going back at school or work. Here at the City, we’re getting back into the swing of things and a lot is going on.

At 2 pm, O-Train Line 1 opens to the public. Service runs until 2 am. All bus routes remain in place for 3 weeks. On Oct. 6, the bus network will undergo major changes.

Line 1 will provide fast, reliable service from Tunney's Pasture in the west to Blair in the east. From end to end, a trip on Line 1 takes approximately 24 minutes.

The O-Train line will allow:

O-Train Line 1 operates from the early morning into the late evening every day of the week. On holidays, the train will run on a Sunday schedule. 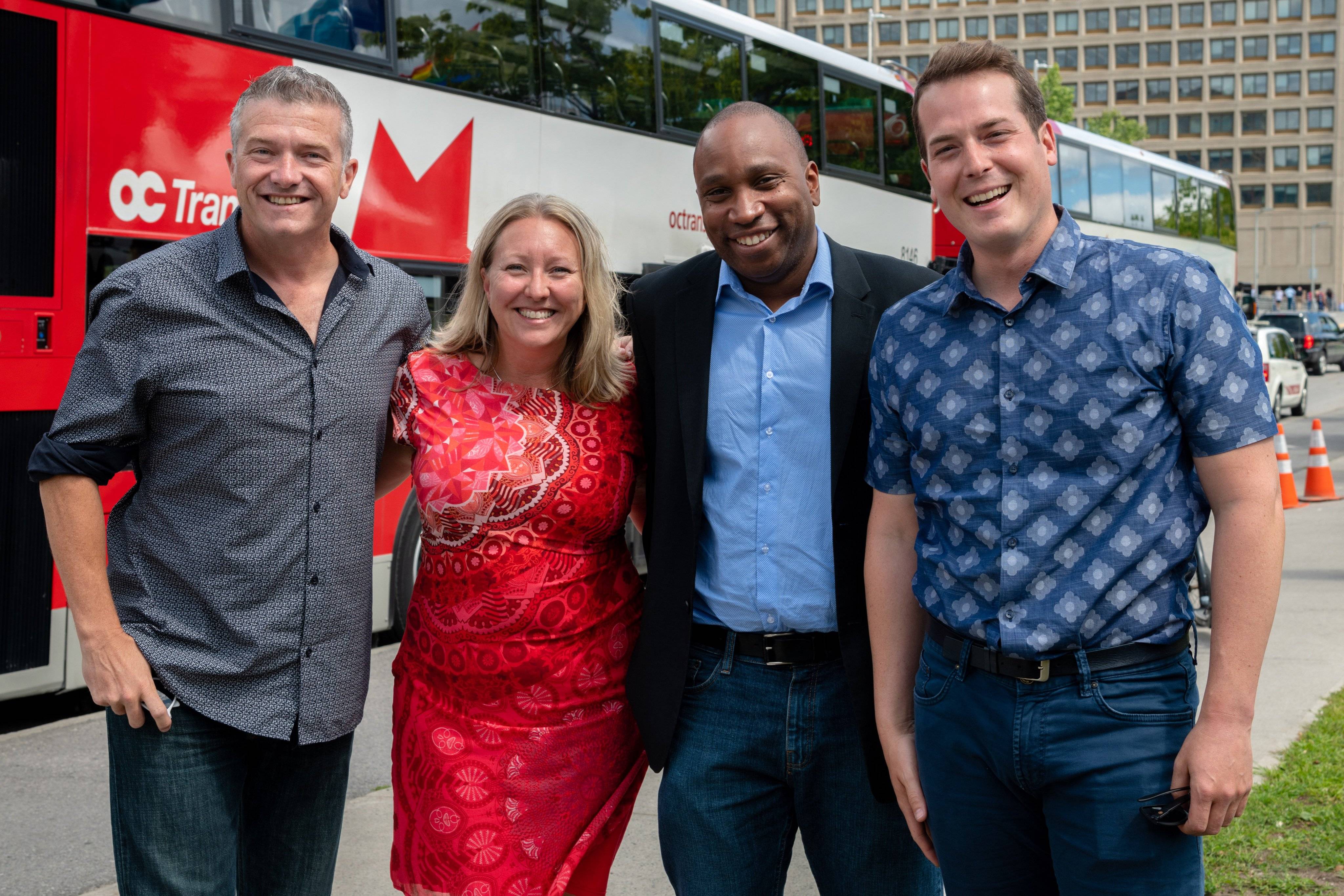 Our next pop-up office will be Monday, September 23 from 5 to 8pm at the Overbrook Community Centre. We’ve always said that we would change the times and days around – we’ve been hearing from many of you that you would like an evening meeting, so this month’s will be after work.

Now that we’re back from the summer break, we will return to the schedule of the third week of every month for our pop-up office. Make sure you sign up for updates to get informed!

In order to effectively set our priorities for the coming year, our office created a survey to gather community feedback about traffic and transportation issues in Ward 13. This survey was intended for anyone who lives, works, or plays in Rideau-Rockcliffe, and we hope to have a broad range of responses.

The survey was intended to obtain actionable information and opinion from residents on traffic and transportation issues before our Ward Council meeting in September. To address the issue of speeding across Ottawa, the City has introduced gateway signage. This system lowers the speed limit to 40 km/h on any street that is not a major arterial road (some examples of major arterials would be Beechwood, St-Laurent, or Montreal). Signage is placed at any intersection with a major arterial, and all other speed limit signage within the newly created ‘zone’ is removed. Our office has a plan in place to transition the whole ward to gateway zones by the end of this term of Council and will continue to seek input on that and other traffic calming initiatives.

The survey is officially closed, but we are thankful to all those who completed it. If you missed out but still have something to say about transportation, please don’t hesitate to email us at rideaurockcliffeward@ottawa.ca.

The City of Ottawa has provided an update for the Combined Sewage Storage Tunnel (CSST) project. The CSST is designed to reduce the frequency of combined sewage outflows to the Ottawa River, and reduce basement flooding risks for several neighbourhoods, while improving the flexibility and redundancy of major downtown collector sewers, specifically the 50-year-old Interceptor Outfall Sewer and the 80-year-old Rideau Canal Interceptor Sewer.

The CSST project continues to have good progress, with tunneling towards Lebreton Flats, that is projected to be by mid-November 2019. Here is the updated construction schedule: http://tiny.cc/jzv7bz

We're looking forward to the end of construction so that we can move onto the rehabilitation and re-imagining of Stanley Park.

If you have specific concerns about the construction project and its impact on our community, please contact 613-580-2424 x 22778 (2CSST) or email CSST@ottawa.ca.

Mayor Jim Watson will award up to 15 individuals with the Order of Ottawa and one individual with the Brian Kilrea Award for Excellence in Coaching.

The deadline for nominations is Friday, September 13th, and with your involvement and encouragement, we hope to once again this year attract a wide and diverse array of individuals, who through their professional achievements, have demonstrated outstanding service and commitment to our city.

Additional information on the Order of Ottawa can be found onhttps://ottawa.ca/en/city-hall/your-city-government/policies-and-administrative-structure/office-protocol/awards-and-recognition#order-ottawa.

The City continues to consult widely on the new Official Plan, and in particular wants to hear from residents through a series of surveys. The surveys are open until September 16 and we encourage all residents to have their voices heard. You can complete the surveys here: https://engage.ottawa.ca/the-new-official-plan?tool=survey_tool#tool_tab

If you don’t like any of the survey tools and just have other specific things you would like to pass onto the team, you can email them at newop@ottawa.ca

In June I inquired at City Council about the erasure of road pavement markings as a result of precipitation and freeze-thaw cycles, and the extent to which these marking changes affect the safety of residents who rely on the markings to safely walk, cycle, or interact with other traffic. I asked what factors were used to determine priority in re-painting of cycle lanes and crosswalks, and whether vulnerable road users, such as cyclists and pedestrians, were being considered.

Currently, the City’s Pavement Marking Program prioritizes pavement marking application in areas with high volumes of vehicular, pedestrian, and cyclist traffic. The program also prioritizes areas in the downtown core at the beginning of the season following the winter months and moves toward the suburbs as the season progresses. While the program prioritizes high-volume intersections, it has also identified an opportunity to study other safety elements to further prioritize the safety of vulnerable road users. Some proposed processes would include applying more durable markings to the pavement to ensure that they are longer lasting, as well as marking unique cycling paths earlier in the season to prevent conflicts between cyclists and other road users. The City of Ottawa is continuing to review the Strategic Road Safety Plan to ensure active transportation users and vulnerable road users are prioritized.

Party in the Park – Back to School Edition

Come and join the Overbrook Community Association for Party in the Park! Encouraging all youth in Overbrook to come out and enjoy the park with a basketball competition, outdoor yoga and a BBQ, in Overbrook Park (33 Quill).

The Provincial Government has announced imminent cuts to social assistance, namely, a change to the definition of disability and the removal of the transitional child benefit – this would leave many people with a huge gap in their income each month, potentially unable to meet basic needs. CAWI is holding an action Forum in Jean Piggott Hall at City Hall. You can sign up here: https://www.eventbrite.ca/e/action-forum-campaign-against-cuts-to-social-assistance-registration-68308704173

Hon Perrin Beatty PC, OC. Head of the Canadian Chamber of Commerce – Job One for the New Government: Finding Canada’s place in an Unfamiliar World. Community Hall at 380 Springfield Road.

Ottawa Burger Fest's mission is to serve the Ottawa community by bringing people and organizations together from a shared love of food. Our goal is to raise money with special burgers sold from participating partner restaurants for the Canada Mental Health Association, while creating a memorable, fun, and family-friendly experience for the Ottawa community. Check out the event website to find participating restaurants: ottawaburgerfest.com

The New Edinburgh Studio Tour (NEST) returns for its fourth annual two-day self-guided artists’ studio tour featuring both local and guest artists, all eager to open up their studio doors to the public, for free! Visit nestudiotour.com for locations of studios.

New Edinburgh is holding its annual neighbourhood garage sale. Clean out your basement, unload the old toys, get rid of the dishes you never use. The New Edinburgh Garage Sale is the best place to sell for a good cause. The Crichton Community Council collects donations (10 per cent of your profits) for neighbourhood programs and equipment.